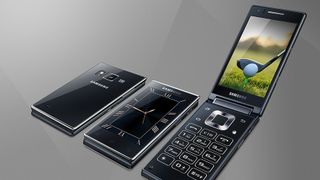 Samsung, never shy of releasing multiple gadgets at multiple times of the year, has followed up the Galaxy Note 5 and Galaxy S6 Edge+ reveal with another handset: a retro-looking flip phone.

For those of you too young to remember, flip phones have a screen on one piece of plastic and a keypad on the other. The main advantage of the form factor is being able to look cool while ending a call with a loud snap.

The shape may be old hat, but Samsung's given it a new spin - there's a Qualcomm Snapdragon 808 powering the device and a 16MP camera for snapping anything worth snapping.

The top half of the handset has screens on both sides for showing pictures, movies or a clock - though you're going to be doing a lot of squinting if you try and watch films on this. It has a Chinese name we're not sure how to pronounce but also goes under the codename G9198.

Samsung thinks this phone has a "distinguished elegance" (or so Google Translate says) but it's unlikely that it will ever find its way out of Asia - if you want a retro-looking bit of technology you might have to head over to China in order to buy one.