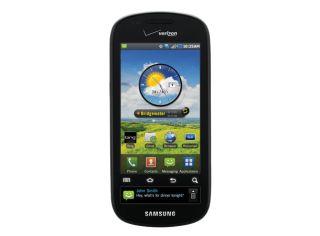 Samsung has officially lifted the lid on its new Continuum Android handset at a snazzy media event in New York City this evening.

The new handset will run on Android 2.1 and feature not one, but two touchscreens; a 3.4-inch Super AMOLED top screen for general use and a second 1.8-inch 'ticker' beneath for registering notifications.

The ticker, which is a world first, shows your RSS feeds, missed calls, texts and IMs. There's also clocks, weather, media controls as well as incoming texts and call alerts.

Working on the theory that it's rude to check your phone every five seconds, you can view the ticker activity thanks to a grip sensor at the side of the phone that lights up that screen alone.

The device has a 1GHz Hummingbird processor to ensure it ticks along at a fair pace and, in terms of multimedia, has a 5-megapixel camera with a flash and 720p video capture. It's got 8GB of storage that's upgradable to 32GB.

Despite such a high profile launch, one has to feel a little for Samsung. Firstly, its party was thoroughly pooped by the Continuum's user manual showing up on US carrier Verizon's website this morning, complete with 360-degree photography.

The company has also had to contend with the with the general disappointment that it wasn't announcing the rumoured Google Nexus Two handset.

The Continuum will be part of the Galaxy stable, but there's no news yet on whether we'll see it in the UK or whether this is another Verizon US-exclusive.