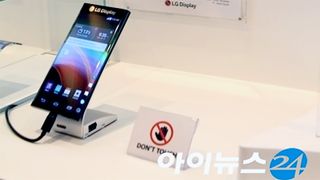 Away from the main announcements of CES 2015, it appears that LG Display quietly showed off a display with curved edges, like the rumoured Samsung Galaxy S6 Edge.

LG is no stranger to curved phones, having produced the LG G Flex, and its display arm is reportedly touting a new curved design behind closed doors at CES 2015.

Unlike the G Flex, the LG Display prototype doesn't have a consistent curve, but much smaller, more severe curved edges to the left and right of the screen.

It's effectively the same basic design ideal used by the Galaxy Note Edge, which is reportedly going to be followed-up by the Galaxy S6 Edge later this year.

In the already-released Note Edge, the screen's curve is used to display notifications and to make operating a very large screen phone that bit easier.

According to GforGames, the LG prototype uses a six-inch screen of just 720p resolution, but let's not forget it's largely a proof of concept. Resolution is likely to increase before the tech debuts in a high-end phone.

It's called an Active Bending display in LG's own marketing terminology, but unlike the LG G Flex it doesn't seem like this screen tech is designed to be bent by the user at all. It's pre-bent rather than bendable.

With the Samsung Galaxy S6 Edge expected to set the precedent of offering a curved-edge 'limited edition' version of a flagship phone, will LG do the same with the LG G4?

As it has such a radically different curved design to the recently-announced LG G Flex 2, it arguably pairs better with a conventional flagship than the self-consciously oddball Flex series.