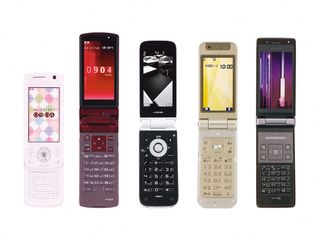 DoCoMo's 904i series phones include a bewildering array of services.

The announcement of new mobile phones in Japan is done like most everything else in that most efficient of nations - with precise timing. NTT DoCoMo 's latest wave of handsets was unveiled as expected this afternoon and it includes plenty of innovative technology, from motion sensors to IC credit cards.

The 904i series consists initially of five handsets - D904i, F904i, N904i, P904i and SH904i - each with a very clear target user. New services common to each include the ability to have a second phone number and email address on a single SIM card - DoCoMo's calling this service '2in1' - and pre-installed Java applications that allow the handsets to be used as credit cards.

While we won't go into depth on the handsets here (they'll only ever be available in Japan), it is worth highlighting a few of the more unusual features. Seasoned Japan watchers will already be aware that all of these phones include GPS and IC cards for use as train passes, e-cash and plenty more.

The D904i features an accelerometer that can be used to control the interface - shake it twice to fire up the email application, for example. HSDPA downloads at 3.6Mbit/s are the selling point of the N904i, while the P904i operates much like a Nintendo Wii controller and has gesture-recognition software that uses the camera to detect hand signals.

How exactly the latter feature adds value to the phone has yet to be made clear, but it's bound to be interesting in some kind of very Japanese way. We'll keep you posted, of course.

Lastly, the most useful phone is probably the SH904i, which has a laptop-like trackpad above the normal keypad. The so-called 'Touch Cruiser' adjusts scrolling speed intelligently, so should provide welcome relief when traversing long pages - something that has always been a burden with normal phone buttons. The Sharp-made handset also has a 3-inch screen that carries the Aquos LCD badge.

Starting in May, the 904i series will be available across Japan from around ¥30,000 (£126) with a contract. As usual, anyone willing to hang on about three months will be able to pick them up at no cost, due to the imminent announcement of what's bound to be the 905i series. Meanwhile, don't forget to check out the official DoCoMo gallery here .