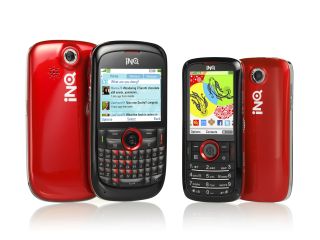 The Mini is a candybar design, and is tipped to be a cheaper version of the INQ1, and the Chat is packs a full QWERTY keyboard and a 2.4-inch QVGA screen.

Both are running INQ's specially designed Twitter application (as INQ earlier promised), so while there's the same Facebook, Skype and IM integration from the first phone, now there's also an 'always on' Twitter service too.

The Chat will come with free push Gmail as well, with it being especially set up for communication thanks to a rubberised QWERTY keyboard.

The Mini has a 2.2-inch QVGA screen, a 2MP camera and up to 8GB of memory. The Chat offers a similar user experience, although it comes with a home-screen Twitter client and a 3.2MP camera, as well as GPS too.

Both the Mini and the Chat are set up to work as HSDPA modems as well, and can be customised with a choice of seven coloured covers, with more likely in the offing.

If you want to synchronise media, the Chat and Mini both offer compatibility with iTunes and Windows Media Player, so users don't have to install new software just to synchronise with the latest track they've downloaded.

"We build phones that focus specifically on what people want to do most on mobile, and deliver it at a price point that's easy for consumers and profitable for operators," said Frank Meehan, INQ's CEO.

"We have completely broken the vice grip hold that high end smartphones had on great mobile internet experiences, and made them available to everybody."

"With the INQ Chat, we've reinvented the qwerty for consumers by creating a fantastic social mobile. With the INQ1, we were blown away by how much consumers were writing just using the standard 12 keys –30 per cent of them were regularly sending emails. So we know that a keypad will go down a storm."