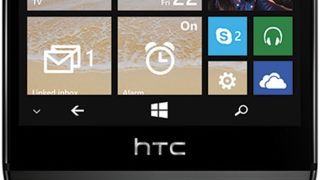 It's the HTC One M8 with Windows Phone 8. Enhance!

The HTC One M8 is one of the best Android phones available, if not the very best, so it's no wonder Microsoft might want to get in on the action.

Now the rumored Windows Phone 8 version of the HTC One M8 has appeared in yet another leak, courtesy of Windows blog Neowin.

These images may mark the best look we've yet had of the alleged HTC One M8 with Windows Phone.

Unsurprisingly, it looks pretty much exactly like the existing versions of the handset, albeit clearly running Windows Phone instead of Android.

The WP8-equipped HTC One M8 first reared its head in June, when an alleged inside source outed its existence.

Since then the phone's specs have appeared online as well, showing a 5-inch 1080p display, a quad-core 2.3GHz Snapdragon 801 chip, 2GB of RAM, and 32GB of on-board storage.

In other words, there really won't be any surprises when HTC, Microsoft and/or Verizon officially unveil the HTC One M8 with Windows Phone 8.

HTC has an event lined up for tomorrow, and it seems timely for the HOM8WP to make an appearance there.