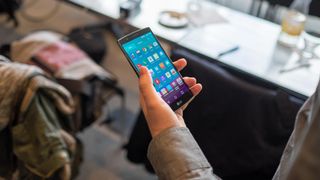 We already knew just about everything there was to know about the LG G4, but the leather-clad smartphone has just been officially revealed.

Facing front, this doesn't look like a smartphone that's shaking things up massively, though LG says its its 5.5-inch QHD Quantum LCD is the first on a smartphone. As for the internals: a Snapdragon 808 processor, 3GB of RAM and 32GB of internal storage.

There's a decent 3000mAh battery to boot and a 16MP camera with bright f/1.8 aperture that LG spent most of its press conference singing about.

Turn it around, however, and you've got a vegetable tanned leather (not faux leather, Samsung) back that LG hopes will differentiate its phone from the billion other on the market.

The phone comes running Android Lollipop, as you would expect, which includes a number of LG's personal tweak. For example, the phone will now organise your photos by 'memory', while another widget tells you when apps are draining battery power when the screen is off.

Finally, G4 owners will get 100GB of free Google Drive space for two years, which isn't to be sniffed at.

Our live blog has finished, but you can catch up below...

16.45 - This is excruciating. Everyone is salivating over it, and the video is lower quality to make it seem they were completely natural. They even had a footballer wearing a shirt with LG emblazoned on it.

Yep, he loved it too.

16.43 - Hearing from 'normal people' now. There's some guy who keeps saying how young he is. Yes, we get it, you're a teenager.

Weirdly everyone loves it. Ha, someone just called it 'aerodynamic'.

16.42 - Mirrorlink is on board. Brief mention of that. Doesn't look like LG is making a big deal of that. 100GB of Google Drive space on board - LG is talking about it like it invented the cloud.

16.39 - The LG UX 4.0 is up now, 'customising to you'. It organises your pictures by 'memory' - creating albums for you and the Smart Notice letting you know when albums have been created. Not sure why that's a good thing.

The better news: scrolling through loads of photos won't be a slow, sluggish affair. That's a better thing.

16.36 - When the display is showing a static image, the CPU goes to sleep, and the new LCD structure allows more light through, so the backlight can be lower - and save the battery.

The Smart Notice feature will also tell you when the battery is being sucked away by rogue apps. 11% battery improvement over last year's G3. Will that be enough though? The G3 was no great shakes for power management, lest we forget.

16.34 - Talking all about the display now - LG is using the Digital Cinemas Initiative colour standard, with 20% better colour reproduction than competitors, according to LG. Coughlin thinks the competition will be 'trying to catch' up - maybe.

The brightness is 25%, the contrast up 50% and in-cell touch (for faster response) and better outdoor visibility.

16.33 - Now we're seeing all the selfie business - it's an 8MP snapper that seems like it's pretty much designed for selfie sticks, thanks to the gesture recognition to take the pic. *sigh*.

16,31 - Hearing about the camera now from a 'humanitarian photographer' - Colby Brown - he's all about the camera, saying it can let users take great, professional photos with a smartphone camera.

I've heard this so many times. It's never happened. Otherwise cameras wouldn't be a thing any more.

16.28 - RAW support is on board, which we'd expected after the launch of the new version of Android. And it can also let you draw with light - and guess what? There's a microSD slot for more space for your photos! Removable battery and microSD - this war just WON'T GO AWAY.