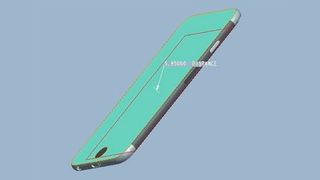 Would Apple change the iPhone's design so significantly?

One of the challenges phone makers faced as smartphones became larger and larger over the past several years is that bigger phones are more difficult to use with one hand.

The solution found by Samsung and others was to move the power/lock button from the top to the side - and now Apple might employ the very same solution.

A set of alleged iPhone 6 schematics has appeared online, and they show the essential button on Apple's new flagship in the same place as the Samsung Galaxy S5's and those found on other large Android phones.

If these are real, it would be the biggest design departure yet for Apple's long-running but seldom-changing iPhone - and an ironic one, considering the lengths Apple has gone to to prove Samsung ripped the iPhone off.

If you can't beat 'em

The iPhone's design is seen by many smartphone users as sacred, but rumor mongers are expecting at least one of Apple's new smartphones to come in at 4.7 inches.

And with such a great increase in display size Apple may finally be forced to alter its seven-year-old design.

These schematic renders originated right in the supply chain at manufacturing facility Foxconn, according to AmongTech. They were first spotted on Chinese site Wei Feng.

The renders do appear to more or less match up with the supposed iPhone 6 dummy model that appeared earlier this week, curves and all.

Let's just hope these don't turn out to have come from the same place as that rumor about Apple's biometric EarPods.