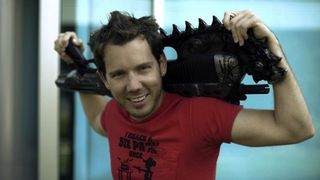 Guns and monkeys on his back

Last month, Gears of War creator Cliff Bleszinski made splashes with a post on his Clifford Unchained blog titled "Deal With It" in which he eviscerated the online community for its reaction to the departure of Adam Orth from Microsoft.

Orth, formerly Creative Director at Microsoft Studios, had tweeted a message regarding the new Xbox and "the drama around having an 'always on' console," hashtagged #dealwithit. The interwebs didn't take his comment too kindly.

The always-on debate has flared with fire and brimstone in the lead up to the console's May 21 reveal, though Orth's ordeal has been one of the more controversial happenings.

Bleszinski opined on Orth's situation and criticized the lynch mob reaction to it in his blog, but he also made this claim: "My gut is telling me that an always online future is probably coming. It's coming fast, and possibly to the majority of the devices you enjoy."

email, though we won't really know what we're in for until a few weeks time. Even if Microsoft's eternally-connected Xbox doesn't come to life, as Bleszinski said, that future for many devices may be here sooner than we expect.

Cliff B is a hard man to track down, but we were able to connect for an extensive Q&A on all of this always-on Xbox business, if he'd want a game he developed to be played on such a console and what he plans to do next.

TechRadar: How do you define always on? Is it needing an internet connection at all times to play games and perform other functions like listen to music? Is it enabling background downloading when the console is off?

Cliff Bleszinski: Saying something is "always on" has become "take what you think this means and come up with your own answer and then decide how upset or offended you are by it."

Years ago my colleagues and I were discussing the idea of "open world" and what that means. It could mean so much depending on the game! Is it a GTA with a huge, sprawling city? Is it Skyrim with terrain and dungeons? Is it a hub-based world like Borderlands? Is it a contained city like Arkham?

So "always on" isn't even about the connection. It's about what the software requires of that connection. We have many devices that won't work without power. I have a white noise maker that I sleep with that plugs in. If the power goes, I can use standard batteries to make sure I sleep soundly. An "always online" system could require a fat pipe 24/7. Or it could require an occasional "check in" once in a while via a cell phone connection.

TR: You write in your April blog about how an always-on future is coming, but can you outline the signs you see that such a reality is almost upon us?

CB: My "always online" world that I'm hoping for for the majority of my devices is one that's closer to what Apple has, which is a secure system with reduced piracy that has a fabulous ecosystem that I'm happy to throw money at.

If it's online then I can play games with friends, download music and movies that I'm paying for, and send asynchronous moves along. If it's online, I can still sling a few birds at some pigs, just without the latest updates.

I currently suffer with Time Warner cable at my home and as a consumer I can assure you that it's inconsistent at best. If I'm mid-game and the connection drops and I can't resume where I was, it may very well be a shelf moment for me.