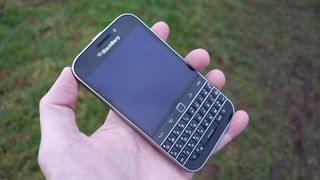 "To keep innovating and advancing our portfolio, we are updating our smartphone lineup with state-of-the-art devices," writes Ralph Pini, Chief Operating Officer and GM for Devices at BlackBerry. "The Classic has long surpassed the average lifespan for a smartphone in today's market."

Known for its emphasis on security and a full physical keyboard for emailing on-the-go, the BlackBerry Classic was a popular go-to in the business and government sector.

However, as market share for the native BlackBerry OS dwindled to a measly 0.5% in favor of platforms like iOS and Android, the company found itself in dire need of shaking things up in order to remain in the phonemaking business.

Bet it all on Black(berry)

BlackBerry's shift away from its older designs opens up the possibility of working more with the more widely-accepted and popular Android platform.

BlackBerry's last stab at developing Android phones - the BlackBerry Priv - came out to mostly positive reviews but ultimately fell short in sales, mainly attributed to the Priv's unattractive launch price at $699, (about £559/AU$975).

Ditching the Classic is already a point of no return for BlackBerry, as the US government instantly released a memo dropping support for the phone in response to BlackBerry's decision - cutting out the major market for the simple, security-minded handset.

Will newer, hipper phones save BlackBerry? The future remains unclear, as smartphone sales this year will decide whether or not the company will ditch making devices altogether and instead focus on software and services.