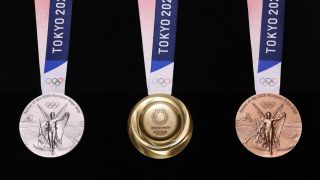 Ever wondered where parts of your phone could end up when you've sent it off to be recycled? Some of those who have recycled their phones in Japan over the last two years may find part of their electronic device hung around an Olympian's neck.

Next year's Tokyo Olympics will use 5,000 medals that have all been made using 100% recycled materials from old electronics.

Collected by the Olympic Committee, it used 6.21 million phones to be able to get the right amount of materials for gold, silver and bronze medals.

Other devices collected included cameras and laptops, amounting to almost 80,000 tons of electronic devices. The Committee found it was able to extract around 71 pounds of gold, 7,700 pounds of silver and 4,850 pounds of bronze.

Donations began in Japan back in April 2017, and it has allowed for the Committee to entirely make its medals from recycled materials. Many donations were made in NTT Docomo shops, which is one of the most popular phone networks in Japan.

It's a step toward the Olympics becoming more sustainable than ever, and it's likely we'll hear about more similar environmental projects in the coming months in the lead up to the games next July.

This project was first announced in 2017, but this isn't the first time the Olympic Committee has used this method to find materials for medals. The Vancouver 2010 Olympic and Paralympic Winter games used a similar method, with the recycling of old computers and TVs.