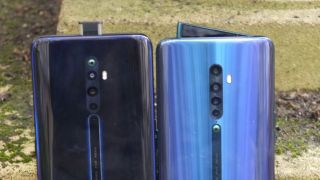 At a London event Oppo just launched the Oppo Reno 2 and Reno 2Z, its newest generation of Reno smartphones. Are they huge improvements on the earlier Oppo Reno and Reno 10x Zoom? Spec-wise, these are actually less impressive.

The Reno series itself launched earlier in 2019, and has since been joined by the Oppo Reno Z. The new Reno 2 has now replaced the original Reno, while the Reno 2Z sits just below it.

The Oppo Reno 2 keeps the iconic design of the previous generation of devices, with the 'shark-fin' pop-up segment that houses the front-facing camera, but it has an extra rear camera (a 2MP 'Mono Portrait' camera for improved portrait shots), a weaker processor, and a lower cost at £449 (around $575, AU$850).

It's the Oppo Reno 2Z that's a little different. It has similar specs for the most part, but has an even weaker chipset than the Reno 2, and a rectangular pop-up segment, doing away with the shark-fin design. It's also more affordable than the Reno 2, available at £329 (around $420, AU$620) in the UK.

These two smartphones were launched alongside Oppo's Enco Q1 wireless headphones, that pack noise-cancelling tech with roughly 20 hours of battery and an bright orange design. These will be available for £109 ($140, AU$210).

Both the Oppo Reno 2 and Reno 2Z will be available from October 18 from a range of retailers in the UK, and Oppo's website. A release date for the Enco Q1 earphones hasn't been stated yet and we don't know if the phones will come to Australia or the US.