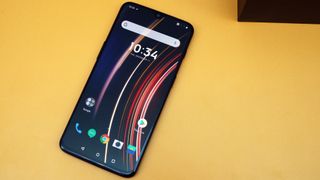 The OnePlus 7T Pro is set to be launched on October 10, and in true OnePlus fashion the company has been teasing the launch event with a slow drip of information in the lead-up – the latest news being that there's set to be a McLaren Edition.

That's according to OnePlus itself, so this isn't just any leak where the information is dubious – the company doesn't specify if it's the 7T Pro that will have a McLaren Edition, but we've already seen the OnePlus 7T launch without a car-themed version, so we're expecting it to be the newest flagship.

We'd previously heard rumors of the OnePlus 7T Pro McLaren Edition too, including OnePlus CEO Pete Lau tweeting a cryptic image hinting at it, so this isn't a huge surprise.

McLaren is a British racing car manufacturer, but it has also got its fingers in other pies, one of which is working with OnePlus to create smartphones. It's not the only car company to work on handsets, with for example the Huawei Mate 30 launching in a Mate 30 Porsche edition version.

What is the OnePlus 7T Pro McLaren Edition?

The OnePlus 6T launched at the same time as the OnePlus 6T McLaren Edition, which was a version of the phone that was upgraded in a few small ways.

It had a little bit more RAM, improved charging tech over the non-McLaren phone, and had a themed design with an orange stripe down the side to resemble the look of McLaren cars. It also came with exclusive headphones in the box.

We'd expect the upgrades to be the same with the OnePlus 7T Pro. The biggest change will likely be the design, as, there's a lot the company can do to add McLaren's 'papaya' hue to the device.

The OnePlus 7T Pro McLaren edition will likely also have a RAM boost as well as a few other tweaks, but essentially it will likely just be a high-end 7T Pro.

We'll likely see the device in all its detail at the OnePlus October 10 launch event. TechRadar will be on the ground to cover all the announcements, so stay tuned to find out all about the OnePlus 7T Pro as well as the McLaren Edition.