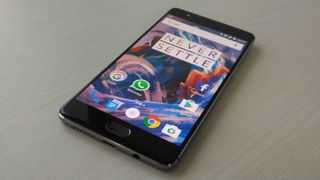 OnePlus is all set to launch an upgraded variant of the current OnePlus 3 called the OnePlus 3T on November 15.

The OnePlus 3T will be unveiled on Tuesday via a Facebook Live video and is set to look almost identical to its predecessor. OnePlus has been sharing some snippets about the upcoming smartphone on twitter, claiming that the device will sport ‘more precision' and ‘more power’.

Leaks and rumours leading upto the launch indicate that the smartphone will come with Qualcomm’s latest Snapdragon 821 SoC clocked at 2.3 GHz, 6GB of RAM, a 3,300mAh battery among 62/128GB of internal storage.

Additionally, the 3T will run on the latest Android 7.0 Nougat and come with an upgraded 16MP camera with a Sony IMX398 sensor and an aperture of f.1.7 compared to the f/2.0 seen on the OnePlus 3.

Additional rumours indicate a shift from the current OLED panel used for the display to an LCD panel with a price increase from $399 to $499 (Roughly Rs 34,400)

With a tentative launch date of June-July, leaks and rumours regarding the upcoming flagship have already started making rounds. Fresh leaks indicate that the OnePlus 4 will be powered by Qualcomm’s upcoming flagship Snapdragon 830 processor and will come with 6GB of RAM.

While Qualcomm hasn’t officially announced the Snapdragon 830, it is expected to ship with quite a few upcoming smartphones including the Samsung Galaxy S8, Microsoft Surface Phone, And the upcoming Turing phones.

Further details about the OnePlus 4 indicate that it will run on OnePlus’s own Oxygen OS running atop Android 7.0 Nougat (no confirmation for 7.1), the processor will be clocked at 3.0GHz and it will have a 4,000mAH battery.