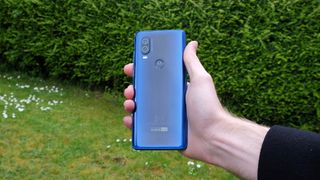 The leak comes courtesy of website Winfuture, a website that regularly posts leaked phone information, and while it's not clear where Winfuture got the information from, it's a fairly trustworthy source in itself.

The headline feature of the Motorola One Action, according to the leak, is the 'Action Cam', a 16MP camera that's designed to work like an action cam that you can buy specifically for recording video when on a day out or participating in sports. It's said to record 4K video, which not all phones can do.

This action cam joins a 12MP main sensor and a 5MP depth sensor, so there's no dedicated ultra-wide or telephoto lens, although action cams often have wide fields of view. Indeed, this one is said to be 117 degrees.

Another novel aspect of the Motorola One Action is its 21:9 aspect ratio, a feature shared with the One Vision but more commonly seen in recent Sony smartphones. This is the same aspect ratio as feature films you'd see in a theatre, and is used to best replicate that experience on a mobile device.

According to the leak, the display will be a 6.3-inch LCD screen with a 2520 x 1080 resolution. It seems to have a punch-hole cut-out for the 12MP front-facing camera.

The chipset is said to be an Exynos 9609 from Samsung – it's pretty rare for non-Samsung smartphones to have Exynos chipsets, but the One Vision has the same chip. In addition, the phone is said to have a 3,500mAh battery and a 3.5mm headphone port.

With regards to price, Winfuture puts it at €259 (around $290, £240, AU$430), so roughly around the same price as the One Vision – of course this price could be different in different regions, but this should give you a rough ball-park figure.

Take this leak with a pinch of salt, as there's no source cited, but we'd expect to see the Motorola One Action soon if it can be leaked in this much detail.