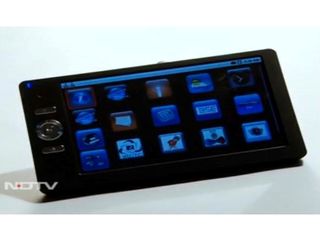 The $35 tablet was shown on Indian TV

Given India's chequered history of non-deliverable low-cost devices, it's easy to believe the sceptics of India's $35 tablet.

While the media disses and dismisses the ultra low-cost tablet, Microsoft and Google are apparently fighting a pitched battle to place their operating systems on the device aimed at school children of the world. Microsoft has come forth and offered its Windows CE OS to run on the device which currently runs Google's open source Android OS.

Striking a confident pose during a TV interview on Wednesday, India's incumbent Human Resource Development minister, Mr Kapil Sibal, said that he was all set to deliver 1 million tablets to students in India's colleges and universities in 2011 at the promised $35. He also reiterated his aim to bring down the price of the tablet to $10 a piece, riding on falling hardware prices.

Interestingly, the minister claimed that education content for the device had already been developed in India's premier technology institute, the IIT, and was open source just like the Android OS the device runs on.

Both the presenters, who have reviewed tablets of all shapes and sizes (and cost) before, and were aware of India's earlier failed attempts to make handheld computers, like the Sakshat and the Simputer, were impressed by the device's built quality, and acknowledged that their efforts to "crash" the device were unsuccessful.

As has been reported earlier, the device has Wi-Fi, and 3G connectivity, and a slew of add-ons as well. You can slot in a miniSD card to complement the 2GB memory, add in a SIM card, and plug in USB devices via the mini and full USB ports, with a video-out, and headphone jack for multimedia.

Ignoring the rock-bottom costs, compared with other tablets, the only negative the reviewers could find with the device was its resistive touchscreen, as opposed to the capacitative touchscreen which would surely add to its price. But then just to get a touchscreen at this price point is a major achievement in itself.

Although we still await a point-by-point reaction to the OLPC project's open letter, Mr Sibal reflected Nicolas Negroponte's belief that the device is a vehicle for knowledge and that it can't be limited to a particular region.

But get this before you reach for your wallet. Of the $35, which equates to INR 1500, INR 750 is government subsidy. Without going into details, the minister said that if the tablet was in the retail market, something for which he has no plans for at the moment, there'll be added cost to the device which will jack up the price.

The minister, a decorated lawyer, also offered advice to the world media: "Never be sceptical of the government. There are times when the government really delivers."

2011 isn't all that far away, and although it may be a while before we get this device in the open market, its mere existence has the potential to lower the prices of tablets globally.