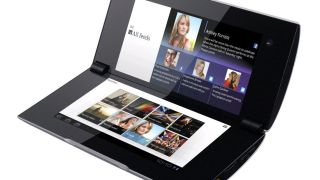 No more Honeycomb, Ice Cream Sandwich on its way

If you were brave enough to splash the cash on a Sony Tablet P, then you'll be glad to hear that the Android 4.0 update will be landing on May 24.

Sony's other slate, the Tablet S, got its Ice Cream Sandwich update a few weeks ago, which has left Tablet P owners feeling a little envious.

A Sony press release in Japan has now confirmed that Ice Cream Sandwich is on its way to the Tablet P, and although it doesn't make it clear if it's a worldwide release or not, we saw the upgrade roll out to the Tablet S on the same day worldwide so here's hoping.

A game of two halves

The impending update will allow Tablet P owners to do things such as accessing the camera app direct from the lock screen, take panoramic photos, new home screen actions including folder creation and more.

The Tablet P was an interesting addition to the tablet market, with its unique clamshell and dual-screen design offering customers something very different to the standard tablet experience.

It managed to score a respectable 3.5/5 in our in-depth review, which shows the Tablet P certainly has some potential.

Check out Sony's handy video below, showing you all the additions which come with the Ice Cream Sandwich update. Although it's a Tablet S in the video, we expect pretty much the same features to appear on the Tablet P.