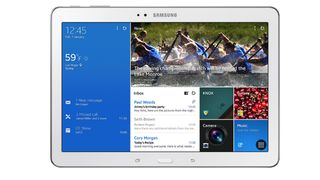 You can now go Pro with Samsung

Not content with its bulging tablet offering Samsung sprung three more tablets upon us at CES 2014, all of which carry the new "Pro" brand name.

Following the Galaxy Note Pro 12.2 announcement, ahead of its CES press conference, Samsung also confirmed 8.4-, 10.1- and 12.2-inch Samsung Galaxy Tab Pro slates are on the way

The range will aim to bring an air of business acumen to its currently rather unprofessional tablet line up as it attempts to battle the iPad Air and separate the Pro range from the cheap Android tablet rat-race.

The new Tab Pro models will bring a choice of processor configuration depending on mobile data speed. For those wanting 4G data, there's a Qualcomm Snapdragon 800 processor doing the heavy lifting.

Users happy to settle for 3G connectivity can suit up with the advanced (although still not advanced enough to handle 4G apparently) and homegrown Exynos 5 octa-core System on a Chip.

All three tablets bring a better-than-HD screen resolution of 2560 x 1600, confirming multiple rumours in the last few weeks, making the 8.4-inch model the smallest to boast such an impressive spec. Each has an 9500mAh battery pack to keep all of those pixels glistening for longer.

There's also an 8-megapixel snapper for awkward tablet photography, while the far-more-useful front-facing camera comes in at 2-megapixel. It comes with up to 32GB of internal storage, which can be upped thanks to a microSD slot.

The 12.2-inch model will come with 3GB of RAM, while the smaller 8.4- and 10.1 inch models will be graced with a not-insignificant 2GB in the random access memory department.

The 12.2-inch also features snappy multitasking like the Note Pro 12.2.

Samsung also chose today's announcement to reveal its new Magazine UX, which replaces TouchWiz on the new Galaxy Tab Pro range and the Galaxy Note Pro 12.2 (the only real difference is the S Pen).

Magazine UX is a new tiled user interface featuring fully interactive and live updating widgets, optimised for larger screens, that allow users to view and arrange the content most important to them.

Here's how Samsung describes it: "A personalized Magazine UX, specifically optimized for a large screen, allows users to further tailor their Galaxy tablet experience for their own needs. The UX enables them to organize their favorite content in an easy-to-use dashboard with automatic feed or news updates and then quickly access the most frequently used apps for a more comfortable reading experience. By utilizing a screen size that is more comparable to traditional magazine-sized material, content is easier to view in its original format when reading digital magazines or e-books."

The tablets will be available, alongside the Galaxy Note Pro 12.2 by the end of the first quarter. Samsung is yet to confirm release dates or pricing.