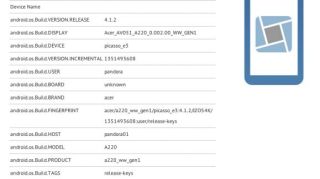 Devil in the details

If new leaked benchmarks are to be believed, Acer may soon unveil the Iconia Tab A220.

The purported tablet will include a quad-core 1.3GHz Tegra 3 processor, and will reportedly run Android 4.1: Jelly Bean.

Strangely enough, the leaked specs don't mention the size of the tablet, though the screen will boast a resolution of 1280 x 752.

There was also no mention of the possible storage space available on the tablet.

Though the benchmark doesn't disclose the size of the potential Iconia Tab A220, Acer's previous tablets may give an indication as to the rumored device's size.

In October, Acer released the Iconia Tab A110, which was a 7-inch tablet running Jelly Bean, and came packed with a quad-core Tegra 3 processor.

The A110 featured a 1024 x 600 screen resolution, and included 8GB of storage, with the option to upgrade to 32GB via a microSD expansion.

Given how closely the statistics match up, and how Acer has already released an updated version of the A100, there's a chance this A220 will follow suit.

If these specs do pan out, Acer would certainly be able to compete with the Nexus 10, Surface, and iPad 4 as long as the price is comparable.

Until Acer actually confirms the tablet's existence though, this benchmark can only be considered a rumor.