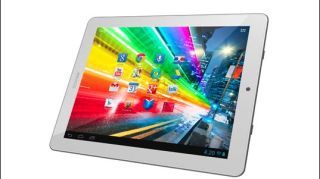 Pocket-friendly eye candy was the name of the game as Archos announced the launch of its Platinum range of tablets Thursday.

The new line not only has that sleek aluminum Apple-esque design, but each tablet is packed with some graphical power and HD displays to show it off.

But just because the Platinum name gives off that high-class feel doesn't mean these tablets don't know how to scrap: the Archos line was launched with the competition in mind and is priced to take other slates down.

The new Archos tablets come in 8-, 9.7- and 11.6- flavors. Each model features a high-definition IPS display, has front and back cameras as well as Mini-HDMI and microSD ports.

Each sports a quad-core 1.2GHz CPU and an 8-core GPU with 1080p video decoding, along with 2GB of RAM. All run Android 4.1: Jelly Bean, and the package comes complete with the Archos Media Center app.

This compares to the confusingly similar Archos Titanium range, debuted at CES, which essentially simply has a lower-power processor.

The Archos 80 Platinum is the 8-inch version, which comes with a 1024 x 768 resolution display. Archos is happy to compare this model to the 8.9-inch Kindle Fire HD.

Though the screen resolution on the Archos 80 doesn't really compare, it has a bit more horsepower than the Amazon slab. And the 80 does come in quite a bit cheaper at $199 (UK£179).

Stepping things up, there is the Archos 97 Platinum HD. The 9.7-inch display featuring a sharp 2048 x 1536 resolution, matching the quality of Retina display. The tablet is the same size and sharpness as the iPad 4, but is much less pricy at $299 (UK£249).

Both Archos 80 and 97 Platinum tablets launch in February around the world, though they might hit Europe a few weeks before they reach State-side. The 116 Platinum is also heading for a world release sometime in April. We've yet to hear Australian pricing, but we'll keep our ear to the ground.

For those looking to check out the 116 version before it launches, Archos plans to show off the whole Platinum line at CeBIT in Germany at the beginning of March.