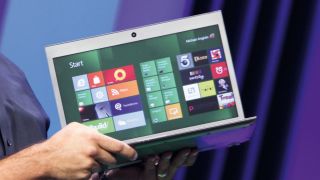 Specifically, Thurrott's blog stated, "Sales of Windows 8 PCs are well below Microsoft's internal projections and have been described inside the company as disappointing."

Thurrott's claim about Windows 8 PC sales may be a good indicator of why the tech giant has been so reluctant, particularly with the perceived conflict-of-interest with Surface sales.

The reason for the sales slump may also be that consumers just aren't that interested in Windows 8.

Despite announcing the sale of four million Windows 8 upgrades in the days following the OS' release, Microsoft remains tight-lipped about any figures relating to Surface or new Windows 8 PC sales.

This may be due in part to Microsoft's perceived conflict-of-interest as it steps into the hardware business with the Surface RT.

Microsoft contends that it still fully supports all of its participating OEMs like HP, Lenovo, and Asus, even in the wake of Windows head Steven Sinofsky's departure.