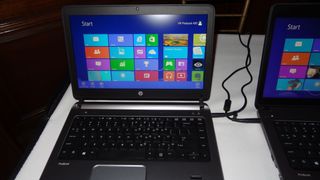 HP has given its line of commercial notebooks a much-needed kick in the pants and unveiled a new sleek line of ProBook 400 notebook PCs today.

The new ProBook 400 notebook PCs are meant for the business crowd, but with this new line the firm hopes to give the ubiquitous MacBook Pro a run for its money.

In order to keep pace with the competition, HP cut down on the bulk, packed in powerful processors, and included a few more features to boot.

In fact, the ProBook series boasts that its 36 percent thinner and 18 percent lighter than its predecessors.

HP ProBook has had some work done

When you pop the hood, you'll notice that HP has included AMD Elite Accelerated A8, A6, or A4 processors or Intel third- or fourth-generation Core processors inside.

You can look but you can't touch

If you're a Windows 8 fan - and according to recent sales, you're in the minority - you'll be pleased to see that all of the notebooks have Windows 8 Pro - and Windows 7, if you like that better - but don't include a touch interface. However, the updated trackpad was designed in the hopes that it will make swiping between apps easier.

Each notebook can also be a mobile hotspot and provide its own wireless connection when you're on the go.

And HP is taking security seriously.The notebooks include a built-in security suite for the software that will encrypt and protect your data, as well as a removable hard drive.

HP also threw in their old favorite security measure, 3D DriveGuard, that senses sudden movement - such as bumps and/or drops - and protects the hard drive. So clumsy thieves won't have a chance at stealing your data.

Additionally, the computing manufacturer has put this line thought its paces. HP touts that the series has had 150,000 hours of reliability testing.

Pricing the 400 series starts at $499 and they will be available later this month.