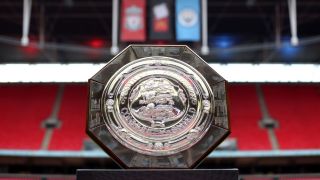 The two best football teams in England meet at Wembley today for the 2019/20 curtain raiser - the FA Community Shield. After last season's tightly contested title race between Liverpool and Manchester City, the two sides will face each other again today. It looks set to be an intriguing affair and, with our help, you can get a Liverpool vs Man City Community Shield live stream wherever you are.

The Community Shield traditionally pits the FA Cup winners against the Premier League champions. However, with Man City having pulled off an historic domestic treble, league runners-up Liverpool will step in for this year's early-season showdown at Wembley.

Liverpool vs Manchester City - where and when

The Community Shield showdown will take place at the home of football - Wembley Stadium in London, UK.

Not resting on their laurels, City have spent almost £75m on three players this summer - with a cool £62.5million of that outlay spent on Spanish midfielder Rodri, who is expected to start in today's game. With Jurgen Klopp having largely resisted dipping into the transfer market during the close season - Dutch teenager Sepp Van Den Berg's £1.7million move from PEC Zwolle to the Reds currently their only signing of note - Liverpool's line-up should have a familiar look to it today,

Come May next year it'll have been 30 years since Liverpool will have won the league. Having come so close last year, Klopp will be keen to get this year's campaign off on the right foot with a win today at Wembley against the team most likely to stand in their way of ending that drought.

So will it be Liverpool or Manchester City that gets to lift the trophy today? Below we're going to talk you through the best ways to watch the Community Shield action with a Liverpool vs Man City live stream no matter where you are in the world.

Live stream Liverpool vs Man City from outside your country

Further down the page we have details of catching the Community Shield in the UK, US, Canada, Australia and New Zealand. All require some kind of subscription.

1. ExpressVPN:  the best all-round VPN for streaming, comes with 30-day trial and 3 months FREE with an annual plan

3. IPVanish: puts premium on security and supports up to 10 devices, so great on the go

Once you're up and running with your chosen provider, you then simply need to open the app and select the appropriate location - it's super easy to do, and then you're ready to watch the Community Shield coverage.

How to live stream the Community Shield in the UK:

BT Sport once again has exclusive rights to show the Community Shield live. It'll cost you just £10 a month to subscribe if you're already a BT landline or broadband customer, but this price increases to £16 a month if you have Sky TV with BT Broadband. Similarly, if you have Sky TV and TalkTalk TV and don't have BT Broadband, this cost rises to £29.99.

If you’re looking to stream the game, the BT Sport app or BTSport.com is where you need to go, enabling mobile, tablet and PC viewing.

Coverage starts at 2.30pm on BT Sports 1, and will also be broadcast on the new BT Sport Ultimate channel, which will show the game in glorious HDR and 4K, along with Dolby Atmos sound.

If you're BT Sport subscriber but find yourself outside the UK this Sunday then you'll need to download a VPN and follow the instructions above to live stream the action.

How to watch the Community Shield: live stream in the US

Having launched in 2018, online subscription service ESPN+ is now picking up more and more momentum - along with a greater range of sports. Among the many events and competitions it now holds the rights to is the FA Community Shield.

ESPN+costs $4.99 per month and allows you to watch online as well as via its mobile app and TV streamer apps on the likes of Apple TV, Amazon Fire TV, Roku, PS4 and Xbox.

The game kicks off in the US at 7am Pacific Time and 10am Eastern Time.

ESPN is the channel you need to head to if you're looking to watch Liverpool vs Manchester City live Down Under. To watch the subscription channel's broadcast on the go, you'll need the WatchESPN Australia iOS or Android app.

Australians can also live stream the action via the Kayo Sports streaming service, which features no lock-in contracts and also includes access to over 50 sports, both live and on demand.

Fear not City and Reds fans in Canada - Sportsnet World will be screening the game live on Sunday.

if you're not a subscriber, you can sign up to Sportsnet NOW for a live HD stream on your computer or mobile device (Wi-Fi signal permitting). Access to a 7-day pass is $9.99 while a month will cost you $19.99. For French-speaking coverage in Canada, viewers will need to tune into RDS Sports.