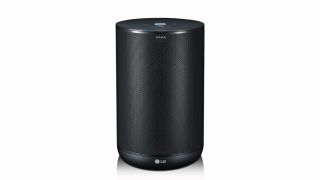 If you were thinking the world needs more smart speakers in it, you're in luck: LG just announced the LG ThinQ Speaker, basically a Google Home made by LG instead of Google. However, this might best Google's own speaker in terms of audio quality.

LG says it's going to offer a "premium-sounding" experience that works with high-quality lossless files and has Meridian Audio technology built in, the fruits of a new partnership between LG and hi-fi stalwarts Meridian. Think better sound than the Google Home, though maybe not at the level of the Google Home Max.

We'll have to wait to hear for ourselves just how good the audio is, because the ThinQ Speaker is being launched at a CES 2018 event in January, when we'll also get details on pricing and availability. LG has worked with Google on the device, so the Google Assistant integration should be seamless.

LG has also announced a number of other audio products for 2018 ahead of CES next month, including the SK10Y soundbar, offering up 5.1.2 channels of premium 550W audio, and support for Dolby Atmos and the Chromecast standard so you can fling stuff to it from your phone.

We're also going to be seeing some new Bluetooth speakers from LG with the PK prefix in the very near future. Again there's some high-fidelity Meridian Audio technology on board and judging by the use of the words "rugged" and "convenient" we'd say these are going to be designed to go anywhere with you.

On top of that, LG has some "all-in-one party machines" in the pipeline, complete with karaoke options and light schemes to really get the crowd jumping. Further details on all of this kit will be revealed at CES, and we'll be in Las Vegas as the event gets underway to bring you all the news.