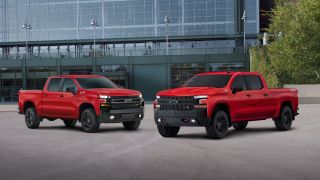 The Lego Group has celebrated the opening of its latest movie in the most logical way possible: by building a full-scale truck entirely from bricks.

Eighteen of the company's master builders spent over 2,000 hours piecing together a replica of the new 2019 Silverado 1500 LT Trail Boss. The finished model contains 334,544 individual pieces (the most common of which is the classic red 2x8 stud brick), and weighs a mighty 3,307 pounds.

The model was unveiled at the North American International Motor Show, ahead of the release of The Lego Movie 2: The Second Part. The movie, which will appear in theaters on February 8, will feature a miniature version of the truck.

This isn't the first time Lego's master builders have turned their skilled hands to auto-making; last year, the company's designers and engineers invested 13,000 hours creating a slick replica of the Bugatti Chiron.

Unlike the blocky Bugatti, which was capable of cruising at a sedate 20kmh, the Silverado isn't driveable. Nevertheless, it's a faithful recreation of the truck, and include working lights and graphic details.

"The themes of determination and teamwork in the new movie align perfectly with our Chevy brand values and we are sure that the all-new Silverado has the features, technologies and strength that would help Emmet, Lucy and their friends as they take on exciting new challenges," said  Sandor Piszar, director of Chevrolet Truck marketing. Everything is awesome, indeed.