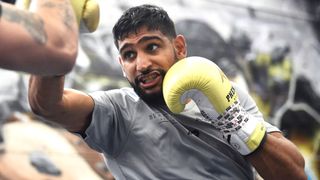 Amir Khan will be hoping for a confidence boosting win tonight, in this his first fight since suffering a demoralising defeat to WBC welterweight champion Terence Crawford back in April. You can watch all the boxing for free and from anywhere with this Amir Khan vs Billy Dib live stream guide.

Tonight should on paper be an easy night's work for Khan - Australia's Billy ‘The Kid’ Dib having been elevated from the undercard as stand-in for Neeraj Goyat, who was forced to pull out after being injured in a car crash. With continuing question marks over the Bolton boxer's chin, Khan needs to impress tonight to show the boxing world his career isn't yet over.

Amir Khan vs Billy Dib - when and where

What date is it? It's fight night! Khan vs Dib is happening today - Friday, July 12.

What time is it? The fight is expected to get going no earlier than midnight local time. So that's a possible 10pm BST start in the UK.

Where is it? The boxing is taking place at the 62,345-capacity King Abdullah Sports City Stadium in Jeddah, Saudi Arabia.

Now 32-years-old, Khan has something of a battle on his hands to prove he's still a welterweight contender following accusations that he had "quit" against Crawford after the fight was stopped for a low-blow that appeared to hit him on the hip. Nothing less than a swift KO for Khan will likely satisfy critics here tonight, with the likely reward for the former unified light-welterweight world champion likely to be another fight in Jeddah at the end of the year against Filipino senator Manny Pacquiao.

Dib, 32, announced he was calling an end to his boxing career in the aftermath of his last bout - an IBF super-featherweight clash with Tevin Farmer in Sydney last August which saw him lose on points. Having come out of retirement to join the undercard, he's effectively moving up three weight categories for tonight's fight.

Also looking to rebuild his career tonight will be Tyson Fury’s cousin Hughie who makes his return to heavyweight action on the undercard. Having lost on points to Kubrat Pulev back in November, Fury will be out to get things back on track against former champ 38-year-old Samuel Peter.

It all adds up to an intriguing night of entertainment for fight fans, and we're here to help you find the best way of watching with our Khan vs Dib live stream guide.

Live stream Amir Khan vs Billy Dib from outside your country

If you've been looking forward to this fight and already know where to watch, your plans may be scuppered if you're out of the country when it's on. That's because broadcasters geo-block their coverage if you try to watch from abroad.

But there's a clever workaround for this, which is perfectly legal (assuming the broadcaster's Ts&Cs allow it) and it involves using a piece of software called a VPN - better that than trying to get some dodgy stream from Reddit.

A Virtual Private Network allows you to change your IP address so you appear to be in a completely different location - in this case, back in your home country. And our best rated option ExpressVPN is ideal for this, as it's available on a whole host of Smart TVs, Fire TV Stick, PC, Mac, iPhone, Android phone, iPads, tablets and more. In fact, so do all of our top three best VPN service picks:

1. Express VPN (comes with a 30 day money back guarantee)
This is the #1 rated best VPN in the world right now. Sign up to Sign up to ExpressVPN and get 3 months free and 49% off on an annual plan as well as that 30-day trial.

2. IPVanish with security a focus, it supports up to 10 devices, so great on the go

And don't forget that a VPN isn't just for boxing streams - there's loads you can do with them. From unblocking restricted sites and watching Netflix in other countries to adding an extra layer of security for online shopping and banking.

It's a rarity to find live boxing on terrestrial TV, but Channel 5 has snapped up exclusive rights to show tonight's fight free-to-air.

You can tune in via Freeview, Sky, Virgin Media and Freesat (all channel 105) or you can stream all the action on mobile, tablet or PC through the My5 app.

The live broadcast begins at 9pm with the Hughie Fury vs Samuel Peter clash. For those wanting to watch the rest of the undercard, 5Spike will be showing the night's opening fights for free from 8pm.

Not in the UK? You'll need a VPN to watch this live stream

How to watch Amir Khan vs Billy Dib in Pakistan

The only alternative is to use one of our best VPNs as described above, set your location to a country on this page that is broadcasting and go from there. But do bear in mind that most paid streaming services do require a credit card based in the country the service is from.