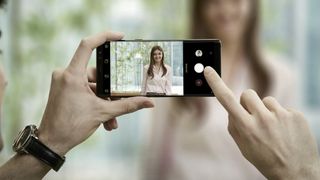 Could the iPhone 11 try to pinch the Galaxy feature? (Image credit: Samsung)

We're expecting the iPhone 11 to bring some new camera upgrades, and it looks like this extends to new video functionality too, according to information found in the iOS 13 developer beta.

The information was found by PhoneArena, which spotted an important change to video recording that could point to an intriguing new feature in the iPhone 11. That feature is the addition of alpha channels encoded into HEVC videos. Don't worry, we'll translate that for you.

HEVC stands for High Efficiency Video Coding, and it's the way smartphone videos are recorded. Now, alpha channels will be encoded too – imagine it's an extra ingredient being baked into the video-y cake.

But what does this mean? Alpha channels effectively allow for live video editing, so you can use the device to edit the background in real-time as you're recording, or getting ready to record.

Using depth-sensing, or Time-of-Flight (ToF) tech, the phone can separate the subject of a shot from the background, so it knows what to change and what to keep the same.

For example, you could shoot someone against an open field and swap their background for a scene from Game of Thrones, or swap out a busy city for a calm lake, or even just desaturate a background to make a subject stand out.

If this all sounds rather familiar, it's likely because Samsung already has this kind of tech, and you can use it in phones like the Samsung Galaxy Note 10 or Samsung Galaxy A80. In these handsets it has proven to be a fun novelty, but not something that really changes your camera experience much in any way, and it's likely to be exactly the same in the iPhone 11.

Since it is just 'a fun novelty', we'd be surprised to see Apple tout it as a killer feature (especially if rumors of the iPhone 11 coming with a stylus prove true). On top of that, if it's part of iOS 13, that means it's likely older iPhones will be able to use the feature at some point too, although it will likely work best with the newer iPhones.

We'll know for sure in early September, as that's when we're expecting Apple to host the iPhone 11 launch event, so stay tuned to TechRadar in the lead-up for all the latest iPhone 11 news and rumors.