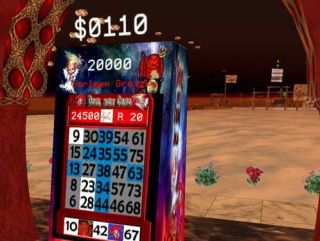 Online gambling is illegal in America, but is allowed in the United Kingdom

The FBI in the USA has been closely examining the online casinos inside the virtual computer world of Second Life . The government agency was conducting the examination at the request of the game's creators at Linden Lab.

"We have invited the FBI several times to take a look around in Second Life and raise any concerns they would like, and we know of at least one instance that federal agents did look around in a virtual casino," said Ginsu Yoon, Linden Lab's president for business affairs.

Second Life is an internet community based in a three dimensional world-like interface. It contains its own real economy and so users are able to gamble with real money in the Second Life casinos.

The US government is currently trying to determine the laws surrounding gambling within Second Life, as there are very strict laws governing gambling websites in America. It is illegal for US banks to process online gambling transactions, effectively outlawing internet gambling altogether.

It is a widely held belief among law lords that gambling in Second Life is breaking these laws which were passed by Congress at the end of last year.

"It's not always clear to us whether a 3D simulation of a casino is the same thing as a casino, legally speaking, and it's not clear to the law enforcement authorities we have asked," Yoon said.

Despite the legal talk, the message to Second Life gamblers is simple: don't panic. It is incredibly unlikely that SL gambling will ever be banned. The freedom that users enjoy inside the 3D world means that it would be virtually impossible to prevent users interacting and gambling between themselves.