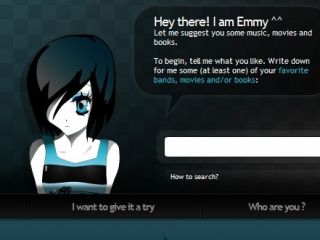 It used to be easy to find new bands – go to your local independent record store and ask for a recommendation.

But in the internet age, we're far too lazy for that.

What we want is for new music to be brought to us - by the power of the web.

So here are 20 sites for finding incredible new artists that you'll instantly love.

We should probably start with the daddy. Last.fm has a plugin for your media player that logs everything you play, then intelligently recommends artists for you based on your listening habits. Works a charm.

2. The Filter
The Filter is the brainchild of rocker Peter Gabriel and uses a model based on Bayesian mathematics to predict the similarity of bands. It logs what you play, runs it through the maths-grinder, and out pops a list of music and movies that you'll love.

3. Elbo.ws
The fertile world of music blogs is a paradise of unofficial remixes and amazing new bands. Aggregating nearly every music blog out there, Elbo.ws is your window into that world, letting you search and listen to tracks from across the blogosphere.

4. Sad Steve
If you prefer your music discovery to be a little more homegrown, then Sad Steve might be the site for you. Presenting itself as an audio search engine, it indexes files across the web, but it also pumps in plenty of editorial about new artists.

5. Tom Robinson's podcast
On the BBC's local radio stations across the UK, there's a vast network of 'Introducing...' shows highlighting the best local acts. On Tom Robinson's 6Music show and the associated podcast, he only broadcasts the absolute best from that network.

7. Blip.fm
Sharing more than a passing similarity with Twitter, Blip.fm asks 'What are you listening to?'. The resulting site is full of 'microreviews' of 150 characters or less - brief, but addictive.

8. Allmusic's 'related bands'
Nowadays there are a wealth of options for discovering music, but a few years ago that wasn't the case. Back then you just searched Allmusic's entry on a band you liked for the 'related artists' section. We're happy to report that particularly strategy is still just as effective today.

9. Hype Machine
Hypem, as it's affectionately called by its users, is a blog aggregator like Elbo.ws. It focuses more on the 'top' blogs, meaning that it's more of an echo chamber but the overall quality of the writing is considerably higher.

10. All SxSW bands torrent
Each year, nearly 2000 bands play at SxSW in Texas. Each one uploads an MP3 to the SxSW website and some enterprising soul collects them all and sticks them in a ginormous SxSW .torrent file. No organization, but oodles of content.