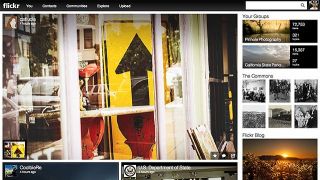 The "internet" asked Yahoo CEO Marissa Mayer to make Flickr awesome again. Or at least that's how she tells it. But however the message got across to Yahoo's new-ish leader, today she and some of the Flickr team realized the fruit of their labor.

Flickr has received a massive redesign, one that's up at this very moment. Too much of the old design focused on words and white space, and Flickr has set out to re-imagine what the CEO called a languishing service.

What's more, users should never again worry about running out of space ever - starting today, Yahoo is offering Flickr users 1 terabyte of free storage, or the equivalent of 537,731 images. You can thank a dare posed by Mayer in March for that one, guys.

"We thought if everyone else was measuring in gigabytes, we'd measure in terabytes," Mayer said.

"Photos make the world go round" was a point of inspiration Cahan repeated more then once about wanting to free users from pixel restrictions, cramped formats and unwanted crops.

A new Activity Feed format meshes friend photos with users' own uploads, while the photo stream owned by Flickr folk loses the chrome and is instead awash with imagery. Users can watch snaps stream by with a slideshow mode, too, with photos that highlight the most important aspects of the composition.

"It's all about you and all about your photos," said Flickr Head of Product Markus Spiering. "We always honor the photograph."

While it could take a lifetime to fill 1TB of imagery, Flickr is making use of some of that storage space by now supporting full 3-minute videos at 1080p HD.

An updated Flickr Android app is hitting the streets to join the rethought iOS experience, as well. Android owners can head on over to the Play Store now to grab the more vibrant app.

In addition to all of the above, Flickr also stealthily put an end to new Flickr Pro subscriptions while rolling out a two-tier payment program for those looking for mega-uploads. The "Ad Free" plan comes in at $49.99 (around UK£32, AU$50) a year, and gives users everything offered in a free account yet sans ads.

Libe Goad contributed to this report