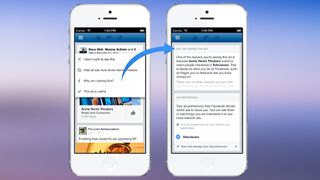 Who's really in control here?

Prefer to be in control of your own destiny? Facebook will soon hand some of the advertising reins over to users, even though advertisers will be watching what you're in to from afar.

Facebook announced upcoming changes in how it determines what type of advertising it shows users. Users, meanwhile, will finally have a little more say it what ads are presented to them.

Instead of mining activity only from Facebook, advertisers will soon be able to tap into other websites and apps frequently used by members to provide "interest-based advertising" similar to what Google already does.

The new initiative will roll out to Facebook users in the United States over the next few weeks, and will then expand across the globe in the months to come.

What are your interests?

Even as Facebook expands its advertising reach, the social network has devised a peace offering for members in the form of ad preferences, which enable users more control over what type of ads they see.

Facebook offered the example of a consumer researching the purchase of a new television, which would then trigger interest-based advertising in the future for other electronics that could potentially complement such an acquisition.

Assuming the TV shopping was a one-time event, Facebook users could then remove electronics from their ad preferences, effectively turning off a potential faucet of similar product offerings to come.

Facebook members will also be able to opt out of the new ad targeting on the web using a Digital Advertising Alliance opt out, or the new controls being baked into the iOS and Android mobile apps.