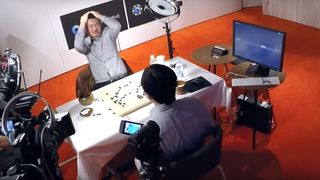 Google researchers have developed the first computer capable of beating a champion player at the incredibly complex game Go.

Not only did Google's project win the race, but AlphaGo's feat stands alone as a massive milestone for AI development.

According to DeepMind, the research team behind the AI, Go presents more possible board configurations than there are atoms in the universe, having led some experts to believe that it would take computers at least another decade before it could fully grasp Go's complex strategies.

Confident that it was ready for the real deal, DeepMind brought in reigning European Go champion Fan Hui, for a special match behind closed doors.

"I thought after the first game that [the AI] didn't want to fight. It likes to play slowly," said Hui, remarking on the experience of playing against a computer. "So that's why in the second game, I fight."

Despite changing up the aggression in his strategy, AlphaGo was still able to beat the 3-time champion 5-0.

DeepMind's next goal for AlphaGo is to take on Lee Sedol - the world's top-ranked Go player for 10 years straight.

"I am privileged to be the one to play, but I am confident that I can win," said Lee, who will accept AlphaGo's challenge this March in Seoul, Korea.

DeepMind chief Demis Hassabis believes that AlphaGo's ability to learn and strategize could also possess a wealth of potential outside of gaming.

"My dream is to use these types of general learning systems to help with science to help them make faster breakthroughs in scientific endeavors," Hassabis told Re/code.

Facebook revealed yesterday that it had plans of its own for a Go-playing AI. Dubbed 'darkforest,' Mark Zuckerberg boasted that the machine, developed by Facebook AI researcher Yuandong Tian, could calculate moves in just a tenth of a second.

Now that Go, considered by many to be the last bastion for games only humans could master, has its first artificial expert, where does artificial intelligence go from here? Dungeons & Dragons?