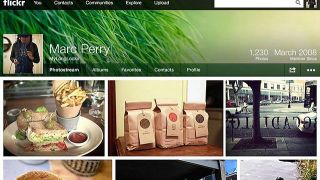 Redesigned, but is it more than just a face lift?

In its place are large high-res photos, a sleek interface designed to work on both web and mobile, and the real draw - a free Terabyte of storage space for each and every user.

To put that into perspective, Google offers 15GB of total storage for free and charges its users $49 (around UK£32, AU$49) a month for 1TB of space.

Head to the new Flickr.com, and you're greeted with a series of colorful photos that fill the entire screen and copy that reads "Smile. Everyone gets a free Terabyte."

Login with your Yahoo, Facebook, or Google account and you're taken to a new homepage that's wall-to-wall photos from your friends - or if you don't have friends, then photos from a series of Yahoo-selected users. On the right hand side, there's an area highlighting more photos from other users.

First stop is the new Photostream, with a customizable header that looks similar to the Facebook cover photo and includes your name, the year you joined Flickr and how many photos you've uploaded to the service. From there, you have easy access to your sets, which is Flickr's term for photo albums and favorites, where photos you select - your own or others - all appear.

Community photo sharing is clearly a bigger priority for the new Flickr, putting friends front and center on the homepage, as well as encouraging users to search for friends by importing contacts from Yahoo mail, Gmail, Hotmail and Facebook and Yahoo Groups.

There's the Upload tool, which also received the same high-gloss (and much-needed) makeover. It's all pretty intuitive - just click the giant upload button, select one or more images and you're able to edit and tag them and set permissions before adding them to the service.

Some early users were experiencing a bug with the new upload feature, which hadn't removed the old Flickr's 300MB/month upload limit, although that restriction seems to have been fixed.

The negatives of the new Flickr? While the design is visually appealing and easy to use, uploading and viewing of these high res, non-degraded images might prove challenging to someone with slow internet service (working at the New York event, I had a wait longer than expected for the giant images to load), and the countless consumers who have older PCs with low-res displays may not find much to take advantage of compared to someone with a Retina-display MacBook.

There is also still the question as to what sort of secondary backup Yahoo will offer users who take advantage of that Terabyte of storage space and use it to house images and their most precious memories. Spiering's verbal promise that "they'll be there forever," did little to ease that legitimate concern.

So don't get too distracted by Flickr's "awesome" new features and forget to also back up your pictures on an external hard drive.

The new Flickr makeover is available now at Flickr.com.