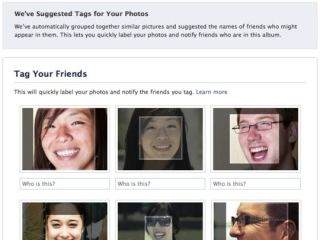 Facebook's tag suggestions feature has caused a storm across Europe

Germany has officially declared Facebook's controversial auto-facial recognition feature illegal and given the site two weeks to remove it.

The feature, which makes it easier for people to tag pictures of their friends through automatically suggesting their identity, has caused a storm since it was announced in Europe in June.

Tag suggestions keeps track of what faces are tagged with which names so that next time you upload photos it can begin offering you time-saving suggestions as to who is in them.

Authorities across Europe, including the UK and Ireland, are probing the legality new feature - which has been in use in America since December - but the Germans are the first to declare it illegal.

Johannes Caspar, a data protection official in Hamburg, claims says that the data Facebook is gathering by using this technology is threatening the anonymity of its users.

"The right to anonymity is in danger," he told the Hamburger Abendblatt newspaper

"If the data were to get into the wrong hands, then someone with a picture taken on a mobile phone could use biometrics to compare the pictures and make an identification," he added.

"We have repeatedly asked Facebook to shut down the facial recognition function and to delete the previously stored data," he also said in a statement on Tuesday.

Facebook, which has provided users with a simple opt-out for tag suggestions, now has two weeks to respond to the ruling or face a fine of $500,000.

So far it is steadfast in its assertion that the feature isn't breaking any data protection laws.

A spokesperson for the company said the site "firmly rejected any accusations that we are not complying with our obligations to European Union data protection laws."

That statement overlooks Germany's own extremely strict privacy laws, which were put in place following the abuses carried out by the Nazis.

It'll be interesting to see how Germany vs Facebook will play out here. Maybe Mark Zuckerberg is still annoyed that Angela Merkel told him she enjoyed The Social Network?

Via: The Atlantic Wire