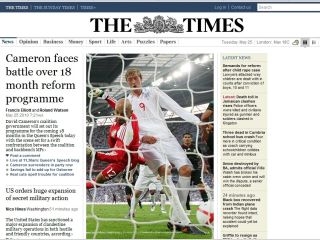 The Times - now behind a paywall

A major survey by KPMG has found that 81 per cent of UK web users would opt to go somewhere else rather than pay for content on the internet.

With the Times paywall now erected, the media world is watching with interest to see how the News International site fares.

According to early indications, and the latest survey from KPMG, it may not be a roaring success, with more than three quarters of those surveyed from the UK saying they would not pay for any content.

In fact, of the 5,627 respondents in 22 countries, the UK was the least willing to actually fork out for web content.

Tudor Aw, head of technology at KPMG Europe, told the Telegraph: "UK consumers still haven't come around to the idea of paying for digital content and are clear that they will move to other sites if pay walls are put up…

"Although consumers are resistant to paying for content, they are becoming more accepting of viewing advertising and for their profile information to be tracked.

"This continues a trend we have seen in previous years and again acts as a pointer as to whether a pay or ad-funded model will eventually succeed."

The survey discovered that three quarters of people prefer online advertising to subsidise their content, with nearly half (48 per cent) saying that they are willing to have their online information tracked.