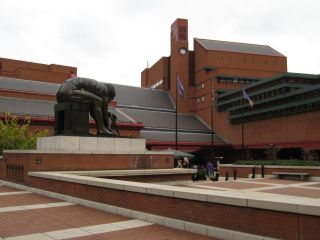 The British Library is planning on scanning a whopping 40 million UK newspaper pages over the next ten years, as part of a new UK news archive initiative.

The library holds its immense newspaper archive in Colindale out in north west London, which includes over 52,000 newspapers from the last 300 years.

The project is to be funded by a private company called Brightsolid, the same company that owns Friends Reunited and Genes Reunited.

Once the newspaper content has been scanned, it will be made freely available at the British Library's branches at Colindale and St Pancras in London and at Boston Spa in Yorkshire.

Home web users will be charged for access by Brightsolid, which is clearly banking on making its millions back through selling the UK news archive back to Brits. Canny!

"Historic newspapers are an invaluable resource for historians, researchers, genealogists, students and many others, bringing past events and people to life," says Chief Exec the British Library, Dame Lynne Brindley.

"By making these pages fully searchable we will transform a research process which previously relied on scrolling through page after page of microfilm or print."