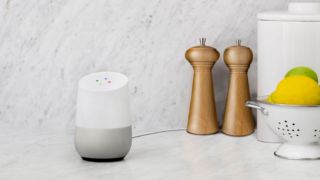 iFixit has finally had its way with Google’s new smart connected speaker, the Google Home, and the teardown has revealed a significantly different piece of hardware than the Amazon Echo.

The most interesting discovery is that the Home has just two microphones which it uses to pick up your voice, as opposed to the Echo’s seven-microphone array.

The Echo’s substantial microphone array was cited as a reason for its ability to pick up your voice in noisy environments. It will be interesting to see whether the Google Home is quite as capable in that regard with its more limited two-mic array.

The drivers across the two speakers also differ significantly. The Home has just one 2” driver alongside dual 2” passive radiators, while the Echo opts for a dual-speaker array of one 2.5” woofer and a 2.0” tweeter.

Another interesting revelation from the speaker is how similar its innards are to Google’s Chromecast streamer.

iFixit notes that the dual-core ARM Cortex-A7 media processor is the same, as is the 256 MB of NAND flash and the 512 MB of DDR3 SDRAM.

We’re still getting to grips with the Google Home speaker for ourselves, but stay tuned for our full review coming soon.