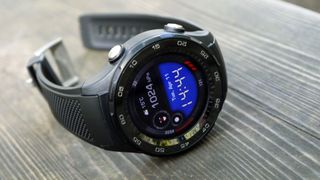 Over the last few years Huawei has turned its back on Wear OS, as it pursued its own smartwatch tech with the LightOS-toting Huawei Watch GT, but it looks like the company may be making a comeback in the smartwatch space.

According to Bluetooth regulation filings spotted by GadgetsAndWearables, it looks like Huawei is preparing four new smartwatches for release in the near future. Those are likely to be a few different versions of the same product.

The most interesting element of this is how one is codenamed CSN-BX9. The Huawei Watch 2 – the company's last attempt at a Wear OS smartwatch from early 2017 – was also codenamed BX9 before getting its official name.

There's no gurantee this is the Huawei Watch 3, but it would make sense if the company were to update its Wear OS device (that sits in a separate line to its Watch GT devices).

Two of the other devices listed sport similar codenames, and it's likely these will be variations on the same product. Expect one to be an LTE version of the watch, while another may come in a slightly different size or design.

Richard Yu, CEO of Huawei's Consumer Division, has previously confirmed the company is looking at making a new Wear OS watch, but in late 2018 he explained the company wanted to make big improvements before updating its device.

A big step up?

We'll probably see some serious improvements over the Huawei Watch 2, which could mean the final product will include a Qualcomm Snapdragon Wear 3100 chipset to offer improved battery life and a more optimized power experience.

It may also be the company decides to include some new health features such as an ECG monitor or an improved heart rate tracker.

There's no guarantee Huawei will stick with Wear OS software for its next full-blown smartwatch, but we're unlikely to know for certain for some time. It may be the company is ready to announce the new device at IFA 2019, which is set to take place at the start of September.

The fourth product on the listing is codenamed ALX-AL10 and that's likely to be a new smartwatch for kids. We don't know any details about this yet, but we'll be sure to bring you all the latest on all Huawei's new smartwatches when we know what they are.