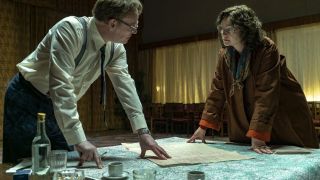 Chernobyl has now been available to watch in its entirety for quite a while and a host of new great shows have come out since. But, this is still an incredible HBO show and is the highest-rated TV show on IMBD. Still haven't seen it? This is the place to find out how to watch Chernobyl online.

Watch Chernobyl online: when and where?

Every single episode of this hit mini-series has now aired. But don't worry, you can still watch Chernobyl online no matter where in the world you are.

You can find a full list of  locations and prices down below no matter where in the world you live.

With a few Emmy nominations, a cult following and a score of 96% on Rotten Tomatoes, you can instantly tell this is one of those shows you don't want to miss. When it first aired, you had to watch Chernobyl with everyone raving about it.

It blends the horrific reality of the disaster with impressive story telling, incredible acting and scenes that will shock. It might not be comfortable viewing but that's what makes it such incredible TV.

So if you're ready to watch one of the best TV shows around (IMDb doesn't lie) then you're in the right place. We've tracked down all of the best locations to watch Chernobyl online, no matter where you live. We've listed all of the options below.

Although the entire show has aired, you can still jump on the band wagon or re-watch it all again (you're brave!). Keep reading to find out all the options on how to  watch Chernobyl online.

Watch Chernobyl online from outside your country:

If you find yourself in the unlucky position where you're out of the country, on holiday or temporarily abroad when you want to watch the show, don't panic just yet - you can still watch all of the Chernobyl episodes. Using a little handy trick, you can get around geo-blocks and digital borders using a VPN.

This will allow you to gain access to all the dramatic Chernobyl content without even having to be in one of the countries that has the episodes available in by changing your IP. That way you can binge watch the show on your holiday.

Which VPN is best for you? Our personal favourite is ExpressVPN. And how do you use that to watch Chernobyl online? Read on to find out all you need to know.

The best way to stream Chernobyl outside the countries mentioned below is to download and install a VPN with a free trial or 30-day money back guarantee.

We've done the easy part for you and tested over 100 Virtual Private Networks and rank ExpressVPN as the number one best. It's quick, robust, secure and incredibly easy to use. It's compatible with devices like Amazon Fire TV Stick, Apple TV, Xbox and PlayStation as well. But there are more fantastic VPN options out there as well:

The best 3 VPNs for streaming online
1. ExpressVPN:  the best all-round VPN for streaming, comes with a 30-day money back guarantee
2. IPVanish supports up to 10 devices, so great on the go
3. NordVPN: SmartPlay tech makes NordVPN a great, affordable choice for streaming

How to watch Chernobyl online in the US:

Considering this haunting drama was a co-production between HBO and Sky, it will come as no surprise that HBO is the go-to place to watch Chernobyl online in the US.

The good news here is that HBO does offer a few packages, which means you get some choice in how much you pay. Most of these packages are pretty flexible which means you can sign up for one month, watch the whole miniseries and then cancel your account.

HBO offers free trials on all of its packages, which helps soften the blow. Prices start at $14.99 a month with HBO and go up depending on which package you choose.

You can watch the whole show on HBO right now.

How to watch Chernobyl online in the UK:

If you're watching from the UK then you get two options for watching the show - either through Sky Atlantic or via a Now TV Entertainment Pass.

We all know that Sky can be expensive, so be sure to check out our dedicated Sky TV deals and packages guide to make sure you're getting today's best prices and offers.

If you want to watch Chernobyl online as cheap as you possibly can, NowTV is the way to go. It offers a 7-day free trial, enough time to catch the whole show.

And if you're out of the country and still want to watch shows from your Sky or Now subscriptions, then you'll need to download and install a VPN as described above.

How to watch Chernobyl online in Canada:

For those wanting to watch this drama mini series in Canada, Crave is the way to go.

You can pay for Crave on a monthly basis or get an annual subscription. Unlike HBO, Crave doesn't seem to do trials but if you do pay for a subscription, they will throw in one free month.

Prices vary for Crave but you can get packages including HBO from around $20 for the month.

All five episodes are now available to watch at any time on Crave.

How to watch Chernobyl online in Australia:

For all of the Australian fans out there, Foxtel's cable service or the company's streaming service, Foxtel Nowis the way to go. You can watch all of the episodes on Foxtel now.

Like all of the streaming services above, you will have to pay to get a subscription and there are a host of different packages available, but Foxtel Now offers a free 10-day trial if you haven't already signed up.