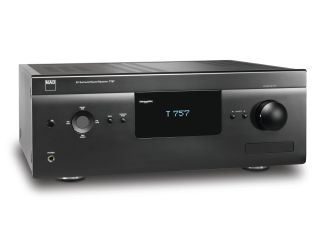 NAD looks to the future

The T 757, available from September, will feature replaceable plug-in modules for some of its audio and video stages, meaning future tech developments won't render it out-dated.

Says NAD director Greg Stidsen: 'MDC's advantages are clear. Customers have the comfort of knowing their investment will not become prematurely obsolete.' Which is good news for anyone who bought, say, an HD DVD player.

The T 757 will hit retail for around £1,500. For that outlay buyers get a 7.1 receiver with four HDMI inputs and one output capable of passing 3D video. The lossless audio formats Dolby TrueHD and DTS-HD Master Audio are naturally supported.

Other connections include a 12V trigger and RS-232 for integration into an automated home cinema system.

Another neat feature of the T 757, alongside MDC, is the ability to customise presets for different sources. For example, speaker levels and tone controls can be programmed to change depending on whether you're watching a film on your Blu-ray player or a regular TV show.

The receiver side of the T 757 comprises an FM/AM tuner, although a rear port is available to connect NAD's optional DAB/DAB+ adaptor. Buyers can also hook up an iPod via the brand's IPD 2 dock.

What's missing from the T 757 is any form of video tweaking. Explains the Canadian company: 'We leave the video processing where it belongs – in your display – avoiding the multiple format conversions that plague lesser AVRs.' Fair enough.