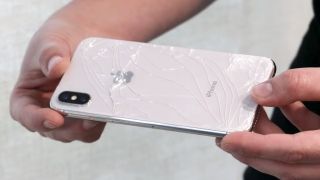 There's nothing worse than dropping a fat stack of cash on a brand-new handset, only to drop and break said handset shortly after. Okay, there probably are worse things than that, but it still sucks royally.

If you're one of the many, many people who've already got their hands on the new iPhone X, you may want to hold on to it for dear life, as Apple's latest device has officially been dubbed the most breakable iPhone of all time by extended-warranty service provider SquareTrade.

Labelled as being of 'high risk' when it comes to breakage, the iPhone X earned a 'breakability' score of 90/100, making it even more delicate than the Samsung Galaxy S8 – a phone that was dubbed the most fragile handset ever earlier this year with a score of 77/100.

As with that handset, SquareTrade has posted a video (which you can watch below) of the rigorous durability tests it put the iPhone X through, including a side-drop from a height of six feet (admittedly a lot higher than most people would accidentally drop their phones from), a face-down drop, a tumble test and more.

As you can see, each drop rendered the phone mostly unusable, with damage caused to the device's display and Face ID camera making the mere act of unlocking the phone a real struggle.

Crucially, the service also rated the device on 'repairability', stating that it was not only quite expensive to repair (Apple's standard warranty doesn't cover accidents, though its AppleCare extended warranty does), but also very difficult to fix.

In its final verdict, SquareTrade stated that the iPhone X is the "most breakable, highest-priced, most expensive to repair iPhone, ever".

It should be noted that SquareTrade is a business that makes money selling extended warranties and protection packages for phones, laptops and other electronic devices, so it's in the service's best interest to stress the iPhone X's fragility.

That said, there's no denying that you should probably slap a case on the phone, pronto.