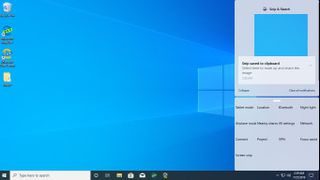 Microsoft has accidentally leaked a redesigned Start menu, and it seems that the same preview build of Windows 10 also contains an all-new Control Center interface – and given the appearance of these streamlined UI elements, we might just be getting an interesting glimpse of how Windows Lite could shape up.

As mentioned, Microsoft accidentally released a preview build of Windows 10 for the Windows 10 20H1 update (destined to land in the first half of next year) to testers, when it should have only been used internally.

And this build 18947 carried a new stripped-back Start menu with a simpler layout and no Live Tiles – something that was rumored to be part of the redesign for Windows Lite, Microsoft’s lightweight spin of its OS that’s far less resource-heavy, not to mention cleaner and simpler in terms of its interface.

Windows Latest subsequently stumbled upon a denizen of Twitter – Rafael Rivera, a Microsoft MVP – who did some digging with this preview build, and managed to enable a revamped Control Center by editing the Registry.

Interesting. Control Center isn't dead and is getting a layout for Windows Lite? pic.twitter.com/oU44308NWeJuly 24, 2019

Shedding some Lite on the matter

And as you can see, the layout of this Control Center is similar to the boiled-down Start menu, leading to speculation about whether these UI elements are all part of the puzzle for Windows Lite.

The new Control Center is accessed from the taskbar, where it can be pulled upwards to expand it, and offer quick access to various different functions such as your network settings, night light, and so forth. Notifications will appear directly above this panel, apparently.

Note that this is obviously still in a very early internal testing stage, and shouldn’t have been released to the testing public. None of the Control Center functions work yet, and of course the appearance is likely to be a rough, early state – but we can get a general idea of what Microsoft might be aiming at here.

As to whether we will see either of these elements in full-fat Windows 10 next year in some form, or indeed in Windows Lite when it emerges, we can’t be sure of anything here. As ever, Microsoft might just be playing with ideas that could get dropped as the year progresses.