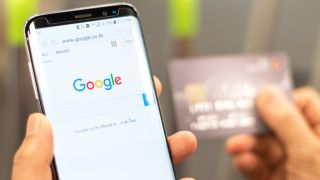 Following the feeding frenzy of Amazon Prime Day, Google has debuted its new shopping platform to lure customers with personalized recommendations. The tool is now live in the US, and will welcome you by name and show tailored suggestions if you're logged in with your Google account.

Google has previously insisted that it has no intention of becoming a retailer, but the new shopping portal puts it in clear competition with Amazon.

Google isn't about to start building warehouses to stock products though, and will instead point shoppers in the direction of a handful of selected retailers including Costco and Target.

Search for an item, and the new site will point you towards products for sale in Google's own store (for devices like Google Home speakers), or from its chosen third-party sellers. According to Forbes, it may also point you in the direction of a physical bricks-and-mortar store.

Some products will be sold with a 'Buy with Google Guarantee', which promises a refund for shoppers if the recommended retailer fails to deliver on time.

Google has already tested the shopping platform in a few territories, including France, but has now rolled it out officially in its biggest potential market, the US. While it hasn't launched outside of the US at the moment, the fact that it tested the platform in France suggests that Google has global ambitions.

Although Amazon has become a literal one-stop shop for virtually every product imaginable, Google has the advantage of having shoppers' entire search history at its fingertips. It remains to be seen whether this will be enough to allow it to carve its own niche, or if it will end up like its ill-fated attempt to take on Facebook with Google+.