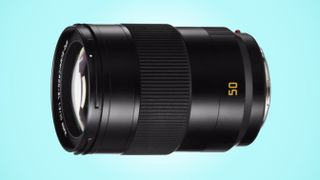 Leica has been promising that its APO-SUMMICRON-SL 50 f/2 ASPH lens would be available in the first half of 2019, but August is here and we're still waiting patiently for further details.

Now, as Japanese camera rumors site Nokishita has discovered, German retailer Foto Koch appears to have beaten the optics specialist to it, releasing plenty of new information on the lens, including a €4,200 asking price that equates to around £3,900 / $4,700 / AU$6,900.

The lens belongs to the L-mount system, which means it can be used on cameras from Leica's L-mount alliance partners Panasonic and Sigma, as well as on the manufacturer's own bodies. So, if you budget doesn't quite allow for both a Leica SL and the new lens, you can at least mount it on a Panasonic S1 or the upcoming Sigma FP.

The company cites reportage, travel photography, studio work, architecture, landscapes, portraits, and close-ups as suitable applications for the lens, and has previously claimed that it sets a new standard in terms of compactness and performance, with corner-to-corner sharpness and balanced bokeh.

What we now know thanks to this leak is that the lens has been designed around 12 elements spread across 10 groups, with aspherical surfaces on three of these elements. As an APO lens, it's corrected for monochromatic aberration to a similar degree as for chromatic aberrations, which will no doubt please those who can afford to drop this kind of cash on it.

The lens is said to have a 0.35m close-focusing distance and a maximum magnification ratio of 1:5, and dimensions of 102 x 73mm, with a weight of around 740g, while the 67mm filter thread that could be seen in images previously released by Leica appears to be confirmed too.

Like other Summicron SL lenses, the optic makes use of a stepper autofocus motor with DSD (Dual Syncro Drive) to move the focusing system rapidly, while a manual focusing ring is also fashioned into the barrel. Other leaked details include the use of multi-coatings on the elements to help banish reflections and keep contrast high, as well as weather-resistance to an unknown degree.

We don't yet know exactly when all of this will be confirmed, but with a price and full details now out in the wild, we can't imagine we'll have to wait much longer.