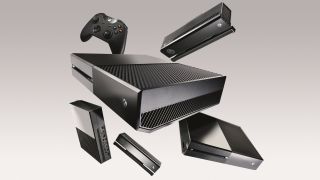 The Xbox One has undergone so many changes and updates, it seems almost irreconcilable with the console that launched two years ago.

But it's actually quite surprising how we got here, given Microsoft's early Xbox 180s.

Microsoft once pitched the console as an online-only system that might do away with discs entirely, but then that didn't happen. Microsoft said it was going to require users plug in the upgraded Kinect camera to ensure gesture-and-voice-controls became the new way to interact with their TVs, but then that went away. It was even going to have downloadable content for Call of Duty before anyone else ... but then that never happened, either.

Microsoft's backpedaling hasn't put the best shine on its current-generation gaming rig, but the fact that it's been able to radically tweak the console so much shows us the Xbox One's secret skill that, in time, might help it overtake the competition and become the greatest console ever built.

Xbox One's feature to rule them all

Today marks the next big step for the Xbox One, as the New Xbox One Experience update adds backwards compatibility for over 100 Xbox 360 games. This is a game-changer (pardon the pun) that could possibly cement Microsoft's black box as the primo console on the market.

"So, what's the big deal?" you say. "I play old games on new tech all the time. I'm downloading Suikoden II to my PlayStation Vita and booting up my old copy of Metroid Prime onto my Nintendo Wii as we speak!"

True, backwards compatibility on a console is ancient news by this point. The PlayStation 2 could play original PlayStation games 15(!) years ago. Even the Nintendo Wii and the Xbox 360 itself could reach back a generation, so long as you had the original disc.

What is so impressive about the Xbox One's upgrade is not so much that it lets you play old games, but that it is adding this feature after it's been released.

Think about that for a second. The console you bought at the beginning didn't have that capability: Microsoft is giving it to you - for free - and making it an objectively better purchase. This is the first time any company has done something like this.

Sure, the Xbox 360 would get a face lift from time to time, and the PS3 got remote play, but backwards compatibility has always been binary: a system either came with it or it didn't.

The other thing to consider is that while game libraries from this generation and the last are overrun with "HD," "Remastered," "Ultimate," "Game of the Year," "Definitive" or "Handsome" re-releases, these are technically newer versions, developed and optimized for new hardware.

Rather than have publishers upgrade old games to work on the Xbox One, the console is going to upgrade itself to work with old games.

This is a brave new world for game consoles, but it doesn't stop at playing last-gen games.

A league of its own

Getting old games on the system is only part of the New Xbox One Experience update. The entire layout of the Xbox One is getting a major overhaul, replacing the UI with an entirely new one, powered by Windows 10. According to Xbox, this will make accessing friends, messages and invites on the system between five to 10 times faster.

Other additions include a revamped store and media hub, as well as the ability to stream games from Xbox One to a Windows 10 PC, meaning you can play Rise of the Tomb Raider on your laptop instead of a television set, if that's how you roll.

In essence, the New Xbox One Experience is Microsoft creating an almost entirely different console, addressing user criticisms without having to make a trip to a manufacturer.

It may also be a while before we see something similar from the competition, as Sony just started up PlayStation Now for streaming old games, and all-but-confirmed rumours of Nintendo being close to unveiling a brand-new system mean that Xbox's approach could be without peer for the foreseeable future.

"[We] decided to tackle a feature that has consistently been at the top of request lists," said head of Xbox Phil Spencer during this year's E3, where the feature was first revealed. "Our goal is deliver the largest games catalog ever on Xbox, and Xbox One backwards compatibility allows us to do just that."

That's great for users, but here's the kicker of what makes the addition so noteworthy. At the same show, Spencer admitted, "We weren't sure [backwards compatibility] was possible."

The implications of not knowing what a console can do before it's released and then changing the functionality later are huge for the console industry, and not without consequence.

This time around, Microsoft made improvements on the console that the audience at large generally likes and approves of. (Who would say "no" to having the games they already own work without having to pay thanks to a free update?)

But what if the next time Microsoft rolls out an update it could, say, reinstate that "always-online" DRM policy, or change the way the Xbox One works in some other way any time it wishes.

What's to stop Microsoft from offering us one product at the beginning of a lifecycle that we all generally like, only to pull the rug out from under us six months later? As illustrated above, this could lead to features or policies that consumers are vehemently opposed to.

There's certainly a darker side to what can be done with these updates, though, thankfully, Microsoft would know of user objections as soon as those started to rumble, just as it did with the DRM policy from 2013.

As it stands, being able to reconnect with old favorites such as Super Meat Boy or Mass Effect without having to cling to a dusty 360 is a positive thing, and I look forward to seeing what this substantial upgrade means for the competition. If anything else, it means the days of seeing beloved games get botched to high heaven due to a bad port might finally be over.