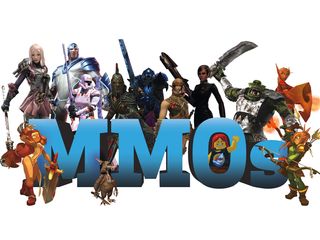 have just a fraction of their original subscribers…

The MMO, says the wise man on the internet – the one who knows everything and nothing – is dying.

That's nonsense. Absolute, crazy poppycock. It's because 'MMO' doesn't even begin to cover what this genre is in 2010. Hell, even using the word 'genre' to describe them is wildly inaccurate.

We're no longer in an age where people are incredulous that games have online persistence and the option to interact with untold numbers of players. That "Ooh, it's on the internet!" mentality is worthless in the here and now. The vast majority of games are now created with the internet in mind, not as an annoying afterthought.

Call of Duty: Modern Warfare, with its much obsessed over ranking and unlock system, is approaching what we might call MMO territory. Farmville, the gotta catch 'em all 2D Facebook game, has social networking at its core. It's sister title, Mafia Wars (also available on Facebook), is similarly styled - and barely a game in the traditional sense, but strangely addictive all the the same.

Big publishers have been getting in on the act as well. Electronic Arts has been getting busy with its free-to-play multiplayer action. The flawed but just-about-free Battlefield Heroes proved that there is the potential for a market outside of the traditional subscription-based services in the west.

It's most recent release, Tiger Woods PGA Tour Online, extended the idea of micropayments to a more reasonable gaming model. Meanwhile Need for Speed World looks set to keep piston-heads off the streets, at least for a little while. Indeed for the most part 'Online games' is increasingly a better way to think about the shifting mass of what was once MMOs.

If, however, we're talking about hack'n'slash fantasy worlds derived from the Everquest model and slavishly looking to the terrifying prevalence of World of Warcraft then yes, times have changed dramatically. The last three years saw the largest surge of mainstream, high-budget MMOs to appear on the market since the clunky original acronym 'MMORPG' was coined.

EVERQUEST II: Everquest II continues to chug on, this time adding battlegrounds for levels 80 to 90

They were exciting times – pick a theme or an intellectual property of your choice, and go live in a world built around it. Of those games, only Lord of the Rings Online could be said to be doing well, holding on as it is to a comfortable number two spot for subscriber numbers, behind the inevitable WoW. Plenty are holding on to a small but loyal subscriber base, but, barring a miracle, decline seems their only future.

Dungeons and Dragons Online is a fascinating exception to the decline, having recently opted for a free to play model with premium, unlockable content for a monthly subscription. Late last year, it looked weaker than an asthmatic kitten, but come its relaunch as DDO : Eberron Unlimited in September 2009, it netted itself over a million new players.

This resurgence is, in a way, the definite statement on the current state of play for MMOs. We're in a new age now: "WoW clones are going away" says Shawn Schuster, editor in chief of popular MMO news site www.massively.com.

CHAMPIONS: Champions Online has so far failed to repeat the success of City of Heroes/Villains

"Right now we're riding the waves of development from four to five years ago, because it takes about that long to make an MMO. Studios saw the success of WoW and figured it would be smart to mimic that, but that's not what the players want. If someone wants to play WoW, they will play WoW because it's a darn good product."

There's one last gasp of that old model to come. Within the next year, World of Warcraft's third expansion Cataclysm should arrive, as should the Bioware developed Star Wars: The Old Republic. There isn't the slightest doubt that either of these will make an ungodly amount of money, but they're very special cases.

There are several of those around already. Mortal Online, for instance, is a wildly ambitious (and complicated) independent project created by fans of MMO granddaddy Ultima Online, while the esoteric, procedurally-generated Love is the passion project of a single man.

Then there's Wurm Online, which has been around since 2006 but unexpectedly reached the limelight last year, as tales of its players' fantastic dedication and impressive constructions proliferated around the web. This is an MMO in which you can build anything you want, so long as you put the time in.

Unlike pervy creation title Second Life, this is genuinely a game of building – every brick must be hewn, every hole dug, every consequence felt. This is a game where you go to live out the imagined reality of existence in a harsh, technology-free world.

We've heard that kind of promise from other games, of course, but Wurm is very much the real deal. "I have been a bit nervous when games I consider to be in the same niche as Wurm has entered the scene such as Age of Conan, Dark and Light, Darkfall and most lately Mortal Online entered the scene," admits Wurm's Lead Designer Rolf Jansson.

AGE OF CONAN: The Godslayer expansion for Age of Conan adds much needed meat to the original

"They all have had their share of problems or unfulfilled hype and most players return to Wurm. I believe in what you could call gamer feature perversion. That is, if you have advanced features in one MMO, such as the possibility to alter the terrain or improve the skills of your pets, you will miss that feature in the next MMO in the same niche."

Current page: The future of MMOs: a new model?