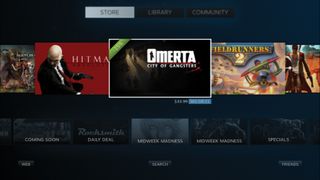 The lack of quality mass-appeal games on Linux is the critics' favourite excuse for dismissing Linux as a serious desktop operating system. We are glad to report that developments in the last few months will rob the peanut gallery of this reason for looking past Linux.

If Linux has had an Achilles' heel, it's gaming. Sure there are top-quality open source games, but not anywhere near as many as on Windows. That's changed with Valve, developers of some of the most popular gaming titles, embracing Linux.

Gabe Newell, Valve's head honcho, has been very vocal in his support for Linux, and finally the company has put money where its mouth is and released a version of its Steam client on Linux, along with a host of games.

Linux users have been playing games on Steam for quite a while, thanks to compatibility apps such as Wine and PlayOnLinux. What we were missing, however, was a native Linux client and official support for our platform from Valve.

According to the buzz on the internet, Valve had been working on a Linux client for some time. However, it wasn't the OS's growing popularity with desktop users that accelerated things. The tipping point was the latest release from Microsoft - Windows 8 - which Newell thinks is a "catastrophe for everyone in the PC space".

Speaking at the Casual Connect gaming conference in July 2012, Newell - a former Microsoft employee - shared his concerns on Microsoft's integration of the Windows 8 Store in the latest release and how it would affect Valve's revenue stream. He believes that once Windows 8 takes off, consumers and developers might be tempted towards the official Windows distribution platform, especially when one considers features such as Xbox LIVE integration, and away from Valve's Steam.

To save his margins, Newell picked up Linux as a hedging strategy. Soon after the conference, Valve announced that it had put together a dedicated team of developers to bring the Steam client, and titles such as the popular Left 4 Dead 2, to Linux.

After months of feverish development, in November 2012 the company announced the launch of a limited-access beta for the Linux Steam client. The client supported many best-seller games, such as the free-to-play Team Fortress 2, and offered another two dozen more for sale. Then, just in time for Christmas, Valve opened the Steam beta for everyone, with an expanded library of more than 40 games.

For now, Valve is officially supporting the Steam client only on Ubuntu to ensure a solid foundation for the client. Subsequently, though, it'll expand its efforts to other distributions.

Turn on the Valves

Valve isn't the only gaming company that is embracing Linux. There has been a similar move by Blizzard, developers of the immensely popular World of Warcraft game. Although in the past the company hasn't been keen on porting its wares to Linux, Phoronix's Michael Larabel reports fresh Linux-related developments at Blizzard. According to his source at the company, Blizzard will officially announce the Linux port of at least one of its games this summer.

Another major studio that could announce titles for Linux is THQ. The company recently released some of its games in a Humble Bundle, but unlike other bundles they weren't cross-platform and were available only through Steam. In addition to over $5 million this bundle of Windows-only games also generated a lot of feedback from Linux users. Enough in fact to force THQ to re-think its Linux strategy.

The company's president, Jason Rubin, tweeted "Got the Linux message loud and clear via #HumbleBundle feedback. Evaluating cost/ benefit as we speak".

In a follow-up interview with Polygon.com, he further explained that "the message I took away from a large number of tweets and comments around the THQ Humble Bundle sale is that there are vibrant communities of gamers using other operating systems besides the dominant ones, and a company like THQ should not overlook them".