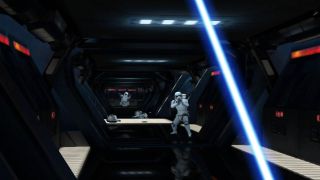 Star Wars simply hasn't received enough promotion* yet, so thankfully, with just hours to go until we can finally see The Force Awakens, Google has created an interactive Star Wars game that lets you use your phone as a Lightsaber. Seriously.

Lightsaber Escape puts you into the shoes of a Jedi, wandering a hostile ship tasked with fighting off hordes of stormtroopers. It's pretty much like being in the films, where you need to use your saber to deflect laser shots back at your assailants.

To play you need both a computer and a phone. Simply tap the unique code generated by one device into the other and it will pair the two, enabling your phone to act as a motion-sensing lightsaber to control the first-person action on the browser screen.

Imagine a Nintendo Wii-style experience, except that the controller that you have to wield is considerably more expensive, and is very definitely something you don't want to send flying across the room.

The game is hugely impressive on a technical level too. There's no app to download – it all works in the web browser. All you need is a Mac or PC running Chrome, Firefox, Safari (Mac only) or Edge/IE11 (Windows).

You'll also need at least a 2GHz Intel Core i5 processor or equivalent, 4GB of RAM, and a dedicated Nvidia GeForce 8600 GT graphics card or equivalent.

Phone-wise, the lightsaber controls work with iPhones 5, 6, 6+, 6S, and 6S+ (Google's FAQ page doesn't mention the 5S – we're not sure if this is an oversight or a genuine technical distinction).