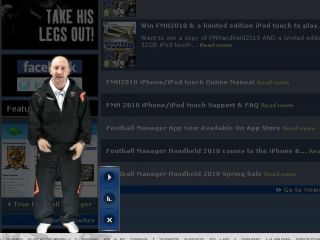 Ian Holloway, the manager of Blackpool FC, has been signed up as a virtual manager for Football Manager 2010.

Sports Interactive, creator of the legendary football management game, has enlisted the skills of Holloway to help out frustrated wannabe managers who are finding the game a tad too difficult.

This isn't the first time that real people have helped with the game. Currently 1,500 scouts are employed to spot talent in 50 countries and the game's database houses information on a staggering 40,000 real players.

Speaking about the news, Miles Jacobson, of Sports Interactive, said: "Ian's quotes have become legendary in the real football world, so it's great that virtual managers get the chance to be inspired by him in the same way as he inspires his players."

In fact, Holloway's football soundbites have been so entertaining, a book was released back in 2008 titled: Little Book of Ollie'isms.

Holloway said about his involvement: "I've got plenty of years experience in football management so hopefully I'll be able to pass on some valuable words of wisdom."

Hopefully wisdom like: "Right now, everything is going wrong for me - if I fell in a barrel of boobs, I'd come out sucking my thumb!"

To see Holloway at work, just head on over to www.footballmanager.com.