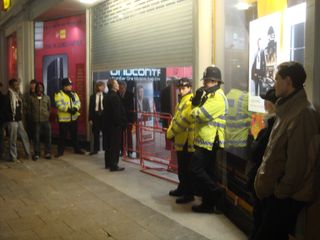 Security around hte country was nowhere near as tight as it was in London, and in some cases it was non existant

Whilst initial reports were that the UK PlayStation 3 launch last Friday went down without a hitch, it turns out that It wasn't without its fair share of violence after all. The Sun has reported at least two incidents where midnight PS3 shoppers were assaulted and robbed only minutes after spending upwards of £500 on the console and games.

21 year old student, Angela Sanchez, was robbed of his £625 PlayStation 3 package less than two minutes after leaving the Game store in Walthamstow just after midnight on the Friday morning.

He'd been queuing with his mother when a gang of thieves swept in and conducted a sickening smash and grab mugging before running off with the spoils of thievery.

"As we left a gang of youths jumped on us. I was punched in the face and mum was bashed as they grabbed my bag," he said in an interview with The Sun newspaper.

"But there was no security and the police hadn't even been told about the shop opening late. I ended up in hospital but Sony and Game didn't want to know. They've treated me like a mug."

There were a few similar incidents around the country, with one man being attacked by a gang of thugs who stole his PS3 and then escaped in a nearby car.

"There was a loud cheer from inside the car, where other youths were sitting, " a police spokeswoman said to the daily tabloid.

"We have expressed concerns before about midnight shopping. If you are walking along in the early hours carrying a plastic bag with a computer shop emblazoned on it, it's an advert to say 'come and rob me'."

It's a nauseating throwback to what happened across America when the PS3 was launched there late last year. One crooked PS3 enthusiast was shot by North Carolina police after robbing one man of two PlayStation 3s he'd queued three days for.